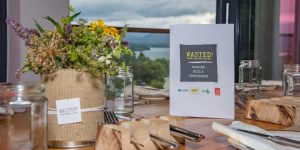 On Saturday (8th September) night twenty-nine people paid more than £150 per head to enjoy a twenty-one-course fine dining experience with a twist and raised nearly £7000 for charity. The unusual menu, designed and executed by Martin Frickel, sous-chef of The Forest Side utilised only ingredients that would otherwise have gone to waste. The one-off event called Wasted! With Martin Frickel, took place at Dome House in Bowness and raised money for four Cumbrian charities; Cumbria Community Foundation, Kendal People’s Café, Windermere Food Bank and Growing Well.

Martin said: “Abundance is one of the success stories of the human species, an insurance policy against a bad harvests. To see what I mean all you have to do is step back into history a little and look back to the creation of agriculture around 12,000 years ago to see even then that it was all about creating surplus…

“So waste is nothing new, to that end the developed nations have around 200% of the food they need and it’s acceptable to bin the surplus. It’s odd that wasting food isn’t a taboo and it should be! 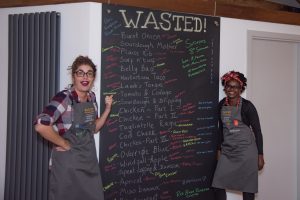 “Just imagine walking out of a supermarket with a couple of bags of food and dropping one in the car park, and then walking off and leaving it there to rot… That’s essentially what we are doing when we create food waste and that’s criminal, especially when you think of the people around the world who are struggling to feed themselves, even in our own country, a supposedly developed nation.” 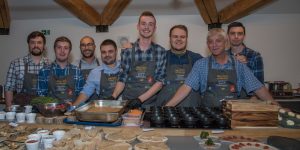 Martin Frickel ran a brigade of six professional chefs who created courses which showcased ingredients including clotted cream on its use-by date and whey to make fudge, and one course was spiced crispy plaice bones! The concept for the night came from the unconventional Windermere based Events and PR Company Flock. Founders Sophia Newton and Janett Walker approached Greg Stephenson of Gundog PR who specialises in Culinary & Lifestyle PR, Greg instantly knew Martin was the perfect chef to see it through as he was already an advocate for the cause. Greg also orchestrated the wine flight that accompanied the meal. Using coravined bottles and samples, even the fine wine itself was donated and would otherwise have gone to waste.

Sophia Newton said: “Doing weird and wonderful events that make people think is what we love most but this was particularly special thanks to the amazing team of people that made it happen. Wasted! was a true showcase of talent, teamwork and generosity. Everyone involved gave their time, produce or expertise for free, it was humbling to see our idea brought to life in such a remarkable way.” 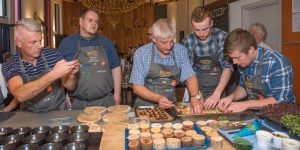 Martin Frickel explained further: “It’s apparent the gulf between the haves and have not’s has widened. Food poverty is a reality and this coupled with the food waste agenda inspired me to do something positive and to make a difference. My response was to create Wasted a pop-up restaurant to raise funds for four brilliant charities who help a whole range of people access food to be able to survive.

“Wasted has been a huge success and it’s down to the dedication and hard work of everyone involved. But it wouldn’t have happened without the cooperation of the wholesale suppliers, producers and supermarkets who were involved in donating waste food and drink. It’s reassuring to note that they too recognise the need to address food waste and food poverty and by becoming involved they have showed that they are keen to really make a difference as well.”

Unconventional approaches to the night included representatives from the charities helping with Front of House. Andy Beeforth OBE of Cumbria Community Foundation, Helen Pateman and Gillian Cowburn of Kendal People’s Café, Magda from Windermere Food Bank and Clairelouise of Growing Well all rolled up their sleeves and helped clear plates, do the dishes and run the Pay-As-You-Feel bar.

The total money raised will be divided between the four charities.