Above Derwent Flood Action Group was established following the floods in 2009. They work in partnership with other agencies to influence local flood risk management. The group received a grant of £7,330 from the Cumbria Flood Recovery Appeal to fit out a mobile box trailer with emergency equipment, so they can better respond in an emergency.

The Above Derwent parish includes Braithwaite, which was left devastated by Storm Desmond in December 2015. The village was divided in two for nearly three weeks after a bridge was damaged and a quarter of all properties flooded. 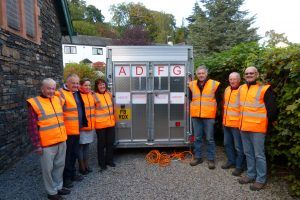 Brian Rutland, Chair of the group, said: “During the flooding in December 2015 it quickly became apparent that to function efficiently as a flood group we would need to equip our volunteers with waterproof clothing, radios, torches, etc. Due to the number of holiday homes in our village, fundraising is very difficult and therefore without this support we would not be able to function at the level we do. The grant has enabled us to purchase all the equipment and a box trailer, which is kept in a secure store.”

Volunteer flood wardens have been recruited and an emergency plan has been developed. The trailer has already been used to promote the work of the flood action group to the wider community.

Jenny Benson, Flood Fund Manager at Cumbria Community Foundation, said: “The flooding in 2015 was absolutely devastating for local communities. This grant has helped put emergency planning measures in place. Thanks to the dedication of local volunteers, the homes in this community will be better prepared and protected from future disasters.”

The Cumbria Flood Recovery Appeal was set up by Cumbria Community Foundation in response to the disaster caused by Storm Desmond. Community organisations are still being encouraged to apply, particularly if they would like to make their communities more resilient.