We are delighted to announce the launch of a new fund aimed at supporting charitable organisations operating across Cumbria.

£115,000 funding is available to projects addressing local need through the Dulverton Trust Fund. The Fund will support a wide range of charitable activities and particularly aims to support projects that directly match the Dulverton Trust’s existing priorities of: Youth opportunities, General welfare, and Conservation and preservation.

Sarah Hale, Grants Manager at the Dulverton Trust said: “We are delighted to be entering a partnership with Cumbria Community Foundation. We hope our funding can help local organisations make a positive impact on both the area and its residents”

Ellen Clements, Senior Grants and Donor Services Officer at Cumbria Community Foundation said: “We’re thrilled to be working with the Dulverton Trust, who have a strong desire to support the communities of Cumbria. By working with the trustees of the Trust, we will be able to provide even more grant aid to charitable organisations and ensure the needs of the communities are met.”

The closing date for the panel meeting in June is 8th May 2016. For more information  contact Ellen Clements on 01900 825760 or email ellen@cumbriafoundation.org

A couple who sustained serious injuries in the Boston Marathon bombing have chosen to mark the third anniversary of that awful day with kindness.

They say the generosity shown by fellow west Cumbrians after their devastating injuries helped them significantly on their road to recovery.

They want to repay that kindness and generosity by helping families in Cockermouth, Workington and Flimby affected by the floods.

It’s 27 years since Eric, from Cockermouth, and Ann from Maryport, emigrated to America but they have never forgotten where they grew up or lost their fondness for the area and its people. 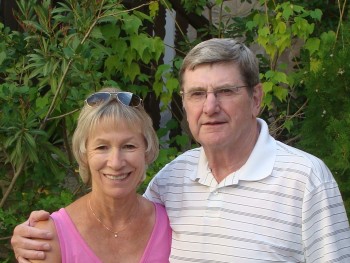 Their own personal tragedy three years ago showed them how small the world really is and how strong personal bonds matter when things go wrong. Their sons Richard and Chris turned to social media in the immediate aftermath of the bombing to find their parents and then saw how the American GiveForward fundraising site helped raise £100,000 towards their parents’ huge medical bills.

It also highlighted how significant social media and the internet are today in times of crisis and recovery, something Cumbria Community Foundation has also seen. In the 48 hours after the December floods, fundraising through JustGiving helped raise £100,000 for the appeal.

Eric and Ann have always been keen athletes and liked watching the marathon in their adopted home city in Boston, Massachusetts. On 15 April 2013, they were stood by the finish line when terrorists detonated two bombs which killed three people and injured them and 262 others.

The Whalleys, both 68, spent a total of 76 days in hospital and underwent roughly 20 operations each involving major limb salvage and reconstruction over 12- 24 months. Eric lost the sight in one eye, had eardrum transplant and suffered traumatic shrapnel brain damage. Ann was on a ventilator in the aftermath and also suffered shrapnel and burns injury to her limbs, neck and face.

Both Ann and Eric are private people and their donation, one of the most significant individual ones made, came with a suitably understated message:

“Please find enclosed a donation towards Cumbria Community Foundation’s Flood Recovery Fund. We are ex-pat west Cumbrians now living in Boston, USA. In 2013 we both incurred serious injuries at the Boston Marathon bombings and were so touched by the well wishes, kindness, support and generosity from family, friends and fellow West Cumbrians which helped significantly with our recovery. We are sad to learn about the devastation resulting from the floods in Cumbria and we would like to thank you all by giving forward.”

Andy Beeforth, Chief Executive, Cumbria Community Foundation, said: “Ann and Eric embody the true ‘Spirit of Cumbria’ which we have seen time and again since the terrible floods in December. They didn’t seek any financial support from anyone after they were innocently caught up in the bombing in 2013 but they were hugely touched to see friends, family and relative strangers from west Cumbria digging deep to help them in their hour of need. Now they have made significant steps towards recovery, they want to extend the same hand of kindness to people who are in need of help to recover from the flooding. I was overwhelmed when I received their donation and would like to say a heartfelt ‘thank you’ on behalf of every family that will benefit from their kindness,”

Ann and Eric are former pupils of Cockermouth Grammar School. They have immediate family in West Cumbria and Yorkshire.

Confirmation of £ for £ match funding from the Government for the Cumbria Flood Recovery Appeal sees the total funds raised reach £9.6m.

Andy Beeforth, Chief Executive of the Foundation, said: “This is incredible news, we know Cumbria was hit by the largest flooding incident in living memory in December 2015, so this money is very much welcome.

“This is a truly remarkable achievement which has only been made possible by the generosity of thousands of people and businesses and charitable trusts backing the Appeal. On behalf of everyone at the Community Foundation we would like to offer our warmest thanks to everyone who has given money and organised fundraising events.”

The Appeal has already supported thousands of people through small and large grants to assist with repairs, loss of income, replacing goods, and rebuilding communities. The Foundation is encouraging people to continue to apply for funding.

More than £3.5m has been distributed across Cumbria with 2,300 households receiving financial support. Community organisations who have suffered flood damage or who are providing immediate relief to people, including longer term community rebuilding projects can also apply, and have so far benefited from more than half a million pounds.

Jackie and husband Phil from Cockermouth didn’t have insurance because their rented home had flooded twice before and pushed the excess amount beyond what was affordable.

Jackie cares for Phil who suffers with ME and Fibromyalgia and they live with their four children. The family received £6,000 to help them furnish their home.

Phil said: “I seriously cannot put into words how truly grateful we all are. To receive this amount of help is incredible and will make the transition of moving back home so much easier.”

Andy continues: “We know that flood recovery is a long term process and I’m delighted we’re in a position to continue to help people. Many people are not back in their homes and new and emerging needs are being identified as people work to rebuild homes and community facilities.”

This additional funding means the Foundation will be able to invest in future community resilience measures including topping up, where possible, support from the Government to help make people’s homes more flood resilient.

The Appeal has taken a three phased approach to funding:

1. Immediate support to help with the emergency response and clean-up work. Grants to households and grants to groups providing front line services.

2. Supplementary support to help those who continue to experience increased household expense. Individual grants for households whose income has been affected over a long term period and households who have incurred significant costs due to relocation resulting from the flood.

Grants to organisations who have suffered damage to their property, those providing emotional support and counselling and advice services.

The charity’s trustees are keeping the Appeal’s priorities and administration under constant review and an interim review of the Appeal is currently underway to ensure funds continue to be targeted at priority need.

“Sadly the scale of the impact means we are confident that we can spend this money effectively in support of addressing hardship and the long term recovery process, and we continue to welcome all new donations to the Appeal,” said Andy.