The nation has taken the Cumbria Flood Recovery Appeal to their hearts, raising £3.5 million for communities affected by Storm Desmond.

Cumbria Community Foundation launched the Cumbria Flood Recovery Appeal on Saturday 5th December 2015 with an initial target of £1m but due to the scale of the damage caused and following more recent flooding this has been increased to £6 million. 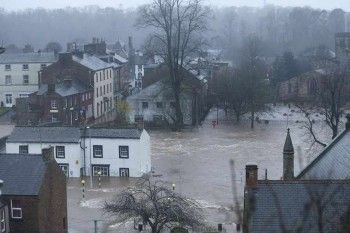 There are three times as many properties flooded than in 2009 where the Foundation raised and distributed £3 million.

Andy Beeforth, Chief Executive of the Foundation said: “The Community Foundation said it would keep the appeal target under review and that is exactly what we’ve done. Having spoken with so many flood affected people and the information we’re collecting from organisations providing support services, we are very confident of the need to raise the appeal target to £6m.

So far more than half a million pounds has been given out in grants and over seven hundred families have received quick financial help to try to rebuild their lives. Below are some quotes from people who have benefited:

Stuart McLean from Kendal said: “The grant is very much appreciated and lightens the load a great deal at this very difficult time. Thanks to all the fund contributors and organisers.”

Joy Allen from Penrith said: “The news of a grant has lifted our spirits at such a difficult time. My two young daughters and I appreciate the help and support we’re being given. Currently, I feel over-whelmed with just how much there is to do and sort out, and so I can’t express how it feels to receive this bit of good news. Thank you to everyone who has donated to the appeal.”

The Flood Recovery Fund 2015 is open to anyone whose home has suffered flooding significant structural damage or people who have lost work or income because of the storm or flood. It is providing support for cleaning up, emergency repairs, clothing, food and drink, heating and heating equipment, childcare equipment and basic furniture.

It is also providing grants to voluntary and community groups who are providing immediate relief to people, offering longer term community rebuilding projects or have experienced significant structural and or flood damage. Most grants will be in the range £5,000-£15,000, however for strategic, coordinated grants there will be no upper limit. These applications will be developed in close association with the Foundation and must involve partnership working.

To find out more about applying for a flood grant please click here or speak to the grants team on 01900 825760.