Starting from Lands End, Tim Cartmell a former farming solicitor and John Rickerby, who was part of Rickerby Limited, will head north on a 530 mile ride home to Carlisle.

While John has already completed the John O Groats to Carlisle section; Tim, who could be described as a novice cyclist, is taking part on a borrowed bike powered by two bionic knees!

They hope to complete the endeavour in ten days, pedalling between 50 and 60 miles a day.

Tim, 67, said: “John has already done John O Groats downhill to Carlisle and now wants to try the uphill section. I stupidly agreed to accompany him as pedalling is apparently good for my two knee replacements. But, looking at John’s bottom in a bicycle saddle isn’t good for my eyesight, so I will pedal some distance behind with John out of sight!”

Both wives have been asked to be on hand to fix any technical bike problems and to supply the riders with drinks and ointments. 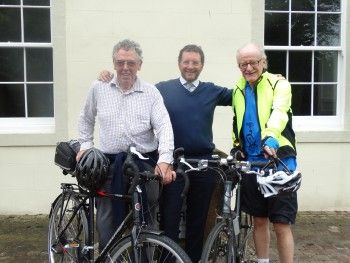 John, 66, said: “We know that it is not that major an endeavour which warrants asking for donations or sponsorship – a sponsor usually gets something in return for his donation whereas our sponsors won’t get anything apart from our thanks and the satisfaction perhaps that we cannot give up having been promised, or having received, your money for our cause.”

Cumbria Community Foundation is a charity founded 15 years ago to help worthwhile charitable causes and purposes in Cumbria. John has supported the Foundation and Tim is a trustee of the Foundation. All the money will go towards supporting the work of CCF.

Andy Beeforth, Chief Executive of Cumbria Community Foundation, said: “This is an epic challenge for Tim and John and one which I will enjoy following as they work their way up through the English countryside. I do worry about Tim though, he has borrowed my bike and by his own admission isn’t a cyclist. He assures me he will be ok because he cycled 65 miles in a day for a charity a decade ago, but this challenge will involve getting back on the bike and doing 50 miles a day for ten days running. No mean feat for a man who will not embrace lycra!”

You can sponsor Tim and John via their JustGiving page.