I have been described as a veteran of the Rivers Ride. Mind you, despite being a spritely 45 I am constantly described as a veteran of everything. The paper round I had as a young man on the top of Shap means that I have the gnarled complexion of an octogenarian hill farmer. When you couple this with blood pressure I have a face so ruddy that if I stop to catch my breath cars will sometimes stop at dusk thinking my head has gone from amber to red.

I am always one of the first to sign up to this great day’s cycling for a good cause. However, even the finely tuned body of an athlete can sometimes go wrong. Despite the many hours spent in my electric recliner contemplating how much exercise I should do I managed to end up with sciatica and a nipped nerve in my neck. On doctor’s orders I had to pull out of the 2014 Rivers Ride. The cycling world gasped in horror as the man who had come last in all of the Rivers Ride to date finally admitted defeat. The (admittedly) niche cycling magazine for Plus Size men ‘Cycling Meekly’ did a feature on whether it was the end of my career and I fell into a meat and tatie pie-filled despair. My lycra sponsorship from Jacamo wasn’t renewed and a very lucrative deal as the face of chubbylove.com (a sister website of uniformdating.com) was terminated.

However, like a phoenix from the ashes I rose majestically from my lethargy and after twenty sessions of physiotherapy and acupuncture I can now put my own socks on. 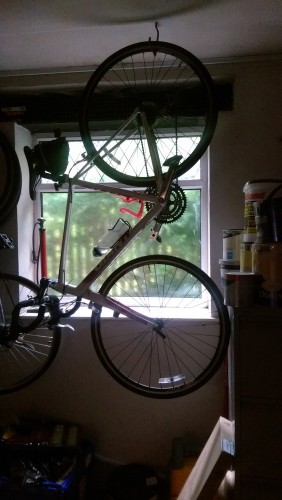 Now fully unfit, I looked longingly at my bicycle hanging from the garage ceiling like a mechanical bat, waiting to unfurl its wheels and ride off into the sunset. Then I left it there for another year. Until the call. Andy Beeforth OBE was on the phone using his Jedi Mind Tricks on me once again. Previously this technique had seen me towing a beer barrel around Derwentwater, hiking up to Stickle Tarn to sleep under the stars in a carrier bag or floating on a four poster bed on Lake Windermere. This time it was to see what was quicker – pedal power or paddle power.  I would cycle from the shore of Derwentwater and Andy would paddle down the Derwent in a poor man’s version of a Top Gear Challenge .