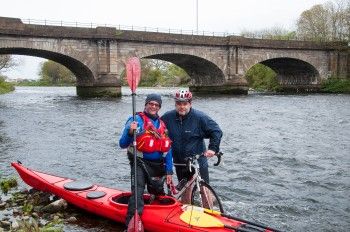 Two unlikely heroes have completed a mad challenge to answer the question: “From Keswick to Workington, which is quicker – to pedal or to paddle?”

The ridiculous race – designed to encourage people to sign up for this year’s Jennings Rivers Ride – has settled the question once and for all.

But who won? Was it cycling warrior Gary McKeating, Head of Stakeholder Engagement for Areva, who has proudly come last (or almost last) in every Jennings Rivers Ride to date? Or canoeing champion Andy Beeforth, Chief Executive of Cumbria Community Foundation, who spends his holidays sea kayaking?

They came head to head at 7am, compared their chosen modes of transport, and headed west – Gary on a road route going over the many bridges destroyed in the 2009 floods and Andy going under them on the rivers that lead from the heart of the lakes to the sea. 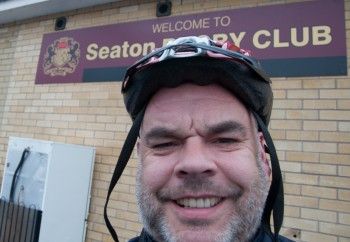 The paddle distance was about 40km and the bike ride ?? …

Nature tried to stop Andy in his tracks with the wind blowing like crazy and forcing his canoe to go back up the river against the flow of the water!

The same wind caused a headwind for Gary, who used all his might to keep pedalling against the elements.

Word has it that Andy asked Gary to take ‘selfies’ at projects supported by Cumbria Community Foundation en-route and that this cheeky tactic meant both the pedaller and the paddler were in Workington by 2pm.

Andy Beeforth, reflected on his river journey, he said: “In this battle between paddle and pedal, two wheels definitely has an advantage over two paddle blades. At best, I travelled at 5mph, sometimes at mine 5mph, whereas Gary was able to average 10mph easily … that’s why I asked Gary to visit a couple of funded projects on his way to Workington.

“The river and the wildlife were beautiful. I was genuinely moved by the experience, I’ve been watching the water levels on the Environment Agency website and it shows the recent record highs, which were the 2009 flood levels. Paddling through the affected communities, observing them from the river and thinking about the power of water and devastation was really moving. To know the Community Foundation was able to help so many people in such a major way (from immediate relief of those affected, emotional and practical support and then re-building and flood prevention made me feel very proud). The issues some of our current grants address such as financial issues, mental health and emotional distress are the same as those faced by people in 2009, just the reason for them is different.

“I’m hugely grateful to Alan Ashby, my guide and safety person and Alan’s wife Bernie who acted as support crew. Gary and his wife Joanne were stars too (Joanne took the pics of Gary on the bridges whilst I paddled through the arches) – it was a really memorable thing to do.”

Gary McKeating, who is a keen supporter of Cumbria Community Foundation and willing partner in Andy’s mad challenges said: “Andy is a seasoned kayaker whilst I am a seasoned avoider of all forms of exercise, so the challenge was interesting. I enjoyed stopping off at the community groups to reflect on the great work they do. I decided the best way to keep fuelled for our race was with a nice cup of tea and carb-loading with cake at every opportunity, because that’s what athletes do don’t they? To be honest, I took my time and enjoyed the ride, I could have beaten him easily!!” 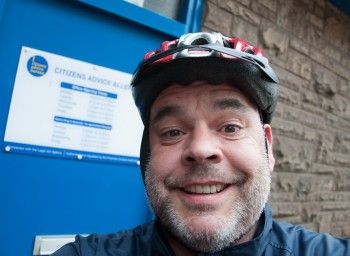 Cheryl Frost, Director of Rather be Cycling, and organiser of the Jennings Rivers Ride for Cumbria Community Foundation, said: “What an original way Andy and Gary came up with to link together the themes of the Jennings Rivers Ride with one of the flooded water courses from the terrible 2009 floods. Whether on a bike or in a canoe it is an amazing journey. We are so looking forward to welcoming loads of people on their bikes on Sunday September 27 to enjoy their own magnificent journey and hopefully raise lots of money for Cumbria Community Foundation.”

Sunday 27 September 2015 will see the fourth annual Jennings Rivers Ride – a series of cycle rides created after the devastating floods in 2009. The four routes reveal some of the UK’s finest scenery and cycling terrain from the heart of the Lake District all the way out to the Irish Sea. The rides all start and finish in Keswick. It’s called the ‘Rivers Ride’ because sections of the routes follow the affected river courses and criss-cross over many of the bridges that were either destroyed and replaced, or were badly damaged during the floods.

The Jennings Rivers Ride is held to raise money for the charitable work of Cumbria Community Foundation. All the money raised will go directly into its grant making Foundation Grants Fund, supporting projects that provide much needed services at a grassroots level.

The Foundation is at the heart of community life. It makes grants to local charities and people in need. The grants help young people and older people, those living with disabilities and those recovering from illness. 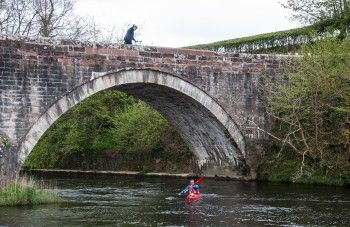 The Jennings Rivers Ride is made possible by the generous support of the sponsors and the help of more than 80 volunteers.

Sign up to the Jennings Rivers Ride and don’t forget to add a Cumbria Community Foundation Fundraising Pack to your basket. Sign up here.