Cumbria Community Foundation has been shortlisted for a ‘Grantmaking and Funding’ accolade in The Charity Awards 2015.

The Charity Awards is the charity world’s most prestigious excellence recognition programme and Cumbria Community Foundation has been shortlisted for its Neighbourhood Care Independence Programme.

The programme is delivered on behalf of Cumbria County Council to support Cumbria’s large and growing population of older people and vulnerable adults.

The winner of the Grant Making and Funding Award and the other nine category winners, plus the recipients of the Overall Award for Excellence and the Outstanding Achievement Award, will be announced at a dinner on 18 June, at the Park Plaza Hotel, Westminster, London.

The black-tie evening will be hosted by world cup winning rugby star Will Greenwood, who will be joined by representatives of the shortlisted charities, alongside a ‘who’s who’of charity leaders and celebrities from the worlds of theatre, television, music and sport.

One in eight older people in Cumbria have remained independent and in control of their lives thanks to the support provided by one of the 33 different partner organisations working with Cumbria Community Foundation to deliver the Neighbourhood Care Independence Programme.

The Charity Awards summed up the reasons Cumbria Community Foundation was shortlisted:

By 2012, unprecedented pressure on resources and Cumbria County Council budget cuts were impacting on services. There was recognition that a new and innovative approach was needed in order to develop a sustainable solution. Contracting with sole delivery organisations was no longer the answer.

The Council needed an independent organisation to run an £860,000 per annum programme for an initial three years, targeted at adults at risk of losing their independence. With a proven track record in managing strategic grants programmes and the ability to convene partnerships and attract and secure additional resources, Cumbria Community Foundation (CCF) was selected for the role. It facilitated a partnership of 33 voluntary sector delivery organisations but offered a single access point to beneficiaries.

By the end of the first year, one in eight of the county’s older residents had used NCIP services. Independent evaluation of NCIP by the Institute of Public Care at Oxford Brookes University found that 95 per cent expressed satisfaction, with over 80 per cent very satisfied. The evaluation also concluded that NCIP “is contributing effectively to reducing and delaying the need for health and social care.” CCF says that the most positive lesson was the scale of benefits resulting from delivery partners working together, both for their clients and themselves.

Awards judge Danielle Walker Palmour described it as a “great example of working collaboratively with a whole range of people.”

Andy Beeforth, Chief Executive of Cumbria Community Foundation said: “This is really important recognition for what we believe is a unique programme. Cumbria has one of the UK’s most ‘super aged’populations.

“The success of the programme comes from the partnership between more than 30 funded groups, all coordinated under one scheme and linked to Cumbria County Council Adult Social Care, and now Public Health, which is serving our older people and vulnerable adults very well.” 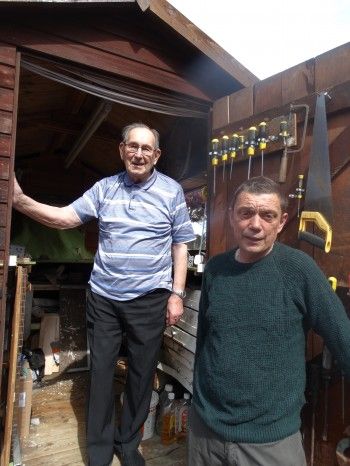 “Neighbourhood Care is unique because it combines some of the larger charities with wonderful grassroots groups in a seamless service. Cumbria County Council deserves a huge amount of recognition and praise for their decision to develop Neighbourhood Care Independence.”

Ian Stewart Cabinet Member for Public Health and Community Services at Cumbria County Council said: “This is great recognition from the sector for very important work that has taken place here in Cumbria.  I want to thank everyone involved, and I’m confident that the success in the Awards will be a springboard for further development.”

“We had an almost record number of entries this year – just four fewer than our all-time high in 2011 – and the standard was excellent, so Cumbria Community Foundation should be very proud to have made the shortlist,”she said.

“For 16 years The Charity Awards have been identifying and celebrating the fantastic work that UK charities do, and the rigorous judging process ensures that only the very best-run charities make it through. We wish Cumbria Community Foundation all the very best of luck on the night.”

Since April 2013, more than 37,000 older people have remained independent thanks to Cumbria’s Neighbourhood Independence Programme.

In Carlisle alone, 4,455 people have been helped by the eight partners (Brampton and Beyond Community Trust, Caritas Care, Carlisle Eden Mind, Croftlands Trust, Cumbria-DeafVision, Cumbria Gateway, Glenmore Trust and British Red Cross) who between them provide home from hospital, befriending, drop-in sessions for people with hearing loss and handyperson services. 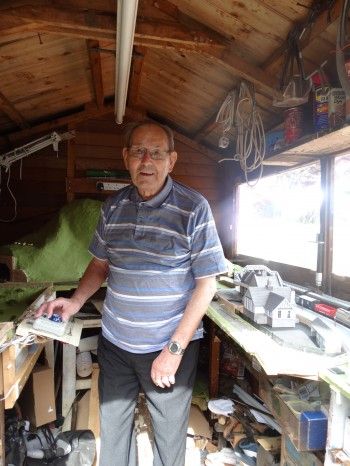 Here’s an example of the difference it makes:

When 91 year old Richard Brown (right) had a “bit of a funny turn” last November he ended up in hospital for ten days. The former Engineering Services Manager for Carr’s had always been handy around the house, but when he came home he needed help to stay independent.

Richard and his wife Laura, 83, live in Carlisle. Their family home for the past 50 years is on two floors and, like many retired couples, they don’t want to move, so they keep adapting their home to meet their changing health needs.

Their sons have helped where they can, putting a stairlift in as Laura’s arthritis made getting up and down stairs too difficult.

The family bathroom has long had its bath taken out and replaced with a walk-in shower and this was the challenge too far for Richard when he got out of the Cumberland Infirmary.

“I was still unsteady on my feet and not very confident. I didn’t feel safe getting in the shower. That’s where Cumbria Gateway came in and Chris the handyman fitted a really strong shower rail and attached a seat to the wall, so I could carry on showering by myself.” 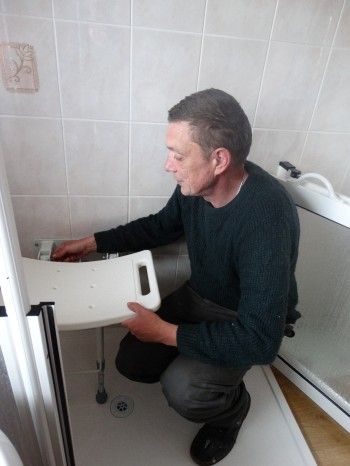 Chris Davidson, works part-time for Cumbria Gateway, he has spent his life working in the building trade and although he was a bricklayer, he can plaster and turn his hand to almost any practical job in a house.

“I do little jobs, anything from gardening, to putting up curtain poles, to changing lightbulbs , putting shelves up or decorating. I find a lot of my customers are just like Mr Brown, they have a family home full of happy memories, they love their houses and they don’t want to leave so to be able to do a little job that makes a big difference in them staying independent is really satisfying.”

“Cumbria Gateway is very much a key partner, providing a handy person and support service across Carlisle and District. Without the support from staff and volunteers such as from Cumbria Gateway, many people would need to turn to statutory services for help. Making sure that gardens look tidy and repair jobs are completed by friendly and trustworthy staff enables people to stay living in their own home without worrying about all the small jobs they otherwise struggle to do.”

Cumbria Gateway is one of the 33 partner organisations providing a range of services to help keep older people independent.

The voluntary and community groups that make up the Neighbourhood Care Independence Programme provide: