The High Sheriff of Cumbria, Martyn Hart and Chief Executive of Cumbria Community Foundation, Andy Beeforth joined non-profit groups at Dovenby Hall, near Cockermouth to celebrate and award the groups and individuals achievements in the last year.

Certificates, cash awards and two High Sheriff Shields were given to 13 community groups and one individual in recognition of their voluntary service to make Cumbria a safe, vibrant place.

High Sheriff Martyn Hart said: “Volunteers are the glue that holds the county together and work tirelessly, so it’s only fair to recognise some of the fabulous work that goes on.” 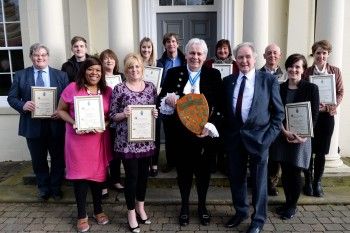 (Photo courtesy of Times and Star)

West Cumbria Achievement Zone, in Distington, and Workington-based music charity Soundwave each received £1,000 and a certificate. West Cumbria Achievement Zone was recognised for its work in partnership with schools and work-based learning providers to provide an alternative curriculum for learners aged 14 to 19. Soundwave was recognised for helping 13 to 19-year-olds to engage through music workshops and other events. Stella Kanu, director of Soundwave, said it was wonderful to be recognised and that the High Sheriff had been one of their biggest supporters.

She added: “He was one of the first people I came across when I joined Soundwave and he’s continued to be an active help since.”

Promoting Autonomy and Change and The Rock Youth Project, both based in Carlisle, and Young Cumbria each received £750 and a certificate. All three were recognised for their social work with young people, developing their life skills to smooth their transition into adulthood.

Fiona Sheridan, lead youth worker at The Rock Youth Project, said: “It’s brilliant really because we cover quite a deprived area of Carlisle and it shows people do notice the work we’re doing and that we’re making a difference.”

Time to Change West Cumbria received a High Sheriff Shield and £1,000 for its work to provide homeless people with shelter and develop their life skills. 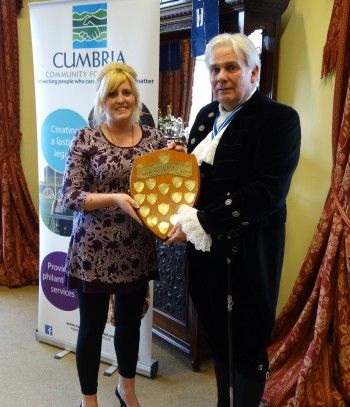 Rachel Holliday (left), company director, said she was overwhelmed to be recognised.
She added: “When I first set up in June 2013, a lot of people said people like me couldn’t do things like this, but we can with the support of people like the High Sheriff, Cumbria Community Foundation and Richard Rhodes, the police and crime commissioner, and this award is proof of that.”

Gina McCabe, project manager of Whitehaven Harbour Youth Project, said: “It’s just lovely to be recognised along with everybody else for making a change and it makes you reflect on why we do what we do and why it is so important.”

Cumbria Community Foundation offers grants to volunteers and charities making a difference to the lives of people across Cumbria. To find out more about the funds we have available visit our Apply for a Grant page or contact us on 01900 825760 or by email.