Just a week to go to the Jennings Rivers Ride and I’m hoping that I’m at least starting to get there in terms of fitness.

One thing is for certain. If it turns out to be another wet day this year I will definitely be prepared for anything that comes. That’s because part of my training took place during some of the wettest weather Europe has witnessed in several decades. 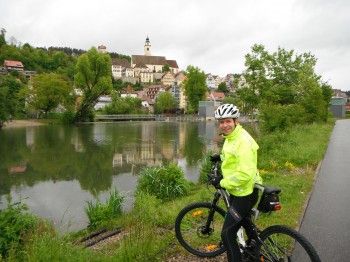 My wife and I took the opportunity to go on a cycling holiday at the start of June while our daughter was away on a 10-day school trip. We chose a river ride in Germany which was recommended by a friend.

All started well as we set off from the source of the River Neckar in theBlack Forestand headed towards Heidelberg, close to where it joins the River Rhine. The villages were beautiful and very historic, looking as if they had changed little for centuries. Some of the half timbered homes looked like a scene from a fairy tale.

Three days in though the weather had turned from warm to damp and then non-stop torrential rain.

I don’t mind getting wet but this was the sort of rain that soaked you right through within minutes. After a few hours the river had started spreading out and ended up two or even three times its normal width.

The Germans were clearly shocked by the amount of flooding that followed. We passed them taking photos and even with our limited knowledge of the language learnt that this was the worst flooding at that time of the year for around half a century. In fact the images made the news not just there but in Britain and right across Europe. (It was the same time as Prague was also at risk and many other European towns and cities). 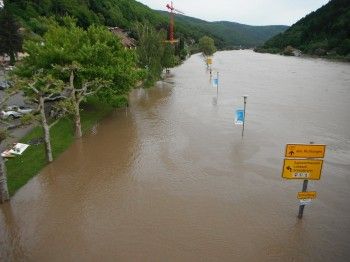 The worst of it for us was the fact that the lovely cycle paths along the river edge had, by now, disappeared under several feet of water and we had to follow long diversions to get to the next towns and villages. We did learn one useful German word though – Hochwasser (flood). The signs were everywhere.

One town was actually cut off to all road users. So we ended up having to retrace some of our steps and catch a train as it was the only way to reach our accommodation for that night. When we finally arrived we saw the hotels pumping out their cellars.

But none of this put us off and we still had a wonderful – and very memorable – holiday. For me cycling is a great adventure and these challenges are all part of the experience, just like last year’s rather damp Jennings Rivers Ride.

I’m sure this year’s event will be blessed by good weather but just in case it’s not, I’m ready!