This year’s Rivers Ride will be 28 miles shorter for me as I have opted to do the Family Ride rather than the Community Circuit.

However, as I will be taking my family it may well take as long to do 10 miles (with an eight and a six year old) as 38 miles on my own.

I do have my husband to help, which is good for when we need a push up the hill …

So, how did we prepare for this fun filled adventure? 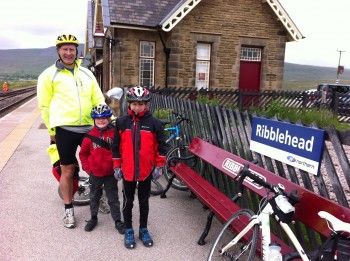 Back in the Spring when waterproofs were all the rage, we discovered the joys of taking our bikes on the Settle-Carlisle railway and cycling between stations. We parked at Kirkby Stephen, put the bikes on the train and then enjoyed the ride to Ribblehead. You can imagine the boys’ shouts of joy when we told them the only way back to the car was to pedal 23 miles…

It was the climb out of Dent – largely pushing said bikes up a very steep hill – that triggered the thought that maybe we could skip the bit between Dent station and Garsdale by hopping back on the train. Me and the boys enjoyed our brief respite on the rails before re-joining the father-ship again.

The scenery was stunning and our youngest enjoyed it the most as he rode on the crossbar seat on his dad’s bike. So we had six months to get the small one bike-fit for our Family Ride.

I also had six months to polish my riding technique and get over my fear of cycling down very steep hills.

My first insight into how you should cycle down steep hills came from Cheryl Frost from Rather Be Cycling. We’d been out on a photo shoot on Honister and so had the lovely steep descent back towards Seatoller to discuss my white knuckle style of descent. Cheryl noticed that I was burning my brake blocks as I gingerly rode down. In truth, I had everything gripped – buttocks on the saddle, hands on the brakes and teeth tight together. The only thing loose was my feet – I had unclipped my shoes from the bike so I could put my feet down if necessary. It was not the right way to ride.

“Let go of your brakes” said Cheryl. I did not let go of my brakes.

“Come on, together, let go of your brakes, then start with your back brake and then use your front brake.” I nodded. I did not let go of the brakes.

“Trust me. Just try it. Let go … now back brake, front brake.” I tried it. I did not die. We repeated this bit all the way down. She even threw in a few more tips – like I really should clip in, stand up on my pedals and put more of my weight over the back wheel. She was right. Slowly I was riding downhill rather than hanging on for dear life. And I survived.

I tried to share my new found tips with the boys. But every mother should know that the last person they will listen to is their mother. Especially if it is to do with riding bikes. 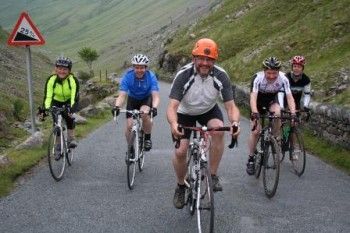 We were very lucky to take part in a relay of all the Jennings Rivers Rides – we, as a family did the Family Ride with World and Olympic champion cyclist Yvonne McGregor. It turns out that tips from a real professional get taken in much better. Yvonne was an absolute sweetheart with the boys, encouraging them to believe in themselves and challenging them to mini races en-route. A treasured memory of that day was watching my eight year old go over the wooden bridge on the old railway track, open his mouth and go “er-er-er-er” as only you can when you ride over bumps … only to hear another set of “er-er-er-er” and realise that Yvonne’s inner child had joined in! 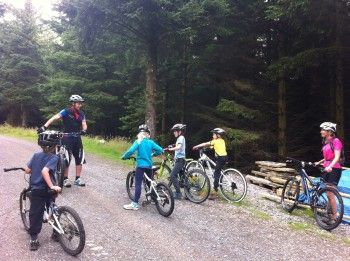 We decided to take our training to another level and signed up for a Family Skills Session with Cyclewise – a three hour special session for us and my good friend Sarah Bennett and her two children. It did not start well. My six year old had just taken possession of his brother’s old bike and my eight year old had a hire bike for the session. The aforementioned six year old claimed he could not even ride the bike in the car park!

However, with Dave our instructor and after three hours of intense training in Whinlatter Forest, we all came away with a new found confidence in our riding. I discovered even more downhill control, we all discovered the joys of wheelies (even if the wheel hardly left the ground), learnt new tricks like drop-offs and how to ride over lots of bumps without falling off. We also were bitten by a million midges. That’s what you get in a damp forest in July. 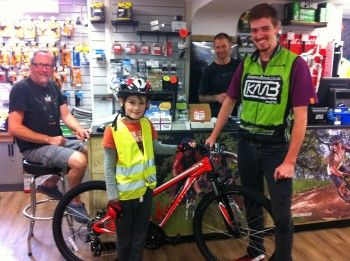 It was clear that our eight year old needed a new bike and with a family holiday looming where cycling to and from the beach was essential, we looked to KMB (Keswick Bikes) for help. It turned out that the growth spurt that meant he outgrew his old bike also meant he had entered a whole new league … he is tall enough to ride an extra small adults bike complete with 26 inch wheels! Within days a bright red bike was his. The guys at KMB were great, they made sure the new bike fitted perfectly and that the old bike was adjusted for the little fella. 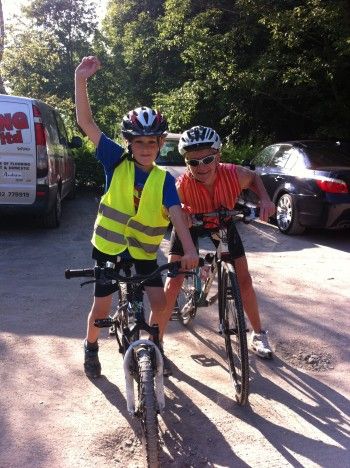 So we’ve had a couple of weeks in France and practiced on and off road. The boys bombed off, standing up on their pedals, the breeze in their hair and as happy as can be. We think the six year old will cope with ten miles, we hope the eight year old will make it up the hills without any help and I hope I let go on the downhill.

The father-ship is focussing on finding all the answers to the Treasure Hunt! As will every other competitive dad on Sunday.

A family of four can take part in the Jennings Rivers Ride for £16 – hope to see you there!