This routine involves at least one long cycle ride a week, of at least 40 miles or more, and ideally two. I am even trying to ensure that these training rides include one challenging hill or pass. 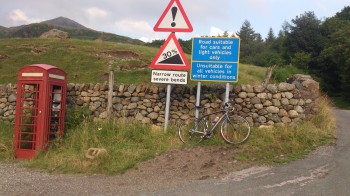 I’ve also managed a series of shorter climbs and the satisfaction of finding these getting easier is hard to express in words without using terms that would get me banned from blogging again!

Most of my rides are with a good friend. They’re always enjoyable, but as he’s much fitter than me, can be a bit of a moral crusher.

However, my recent improvements have meant that now when out on a ride, if I shout loud enough, and the wind is blowing in the right direction, my mate might just about hear something. In fact on a recent ride, on one of the passes, I thought I could see him. Turns out it was a car. A car far in the distance.

On top of the training rides, I’m trying to build up my cycling at the gym too. As I mentioned in my first ever blog, this isn’t the most exciting of exploits. It’s mildly amusing to see the speeds you can achieve when on a static bike and realise just how unachievable they are on our roads in our weather. 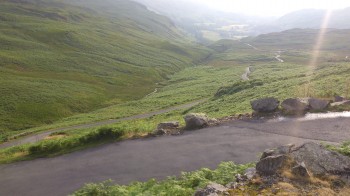 With only three weekends to go until the Rivers Ride, I plan to continue my twice-weekly regime, and have got my sights on a trip over Honister. Really, I should do the daunting triple-header of Whinlatter, Newlands and Honister, which finishes the Rivers Ride, but I’m not prepared to commit to that just now!

Finally, if anyone would like to sponsor me, I’d be eternally grateful! Go to www.justgiving.com/ian-curwen. (Did I mention I broke my back earlier this year?!)