It’s Rivers Ride time again and time to share my pre-event training.  Three years ago I would have described myself as a cyclist; now it would be more accurate to say I’m someone who owns a bike.  I’ve twice completed the long day out but am attracted by the Foundation Flyer in 2013.  This year I reached the age of 45 and seem to have spent more time enjoying the great food and beer available in Cumbria than the fabulous cycling opportunities.

I feel put to shame by my colleagues who have been throwing themselves into impressive feats of physical endeavour including; Keswick to Barrow walks, Hell on the Harbour side, new careers in running and endurance horse riding.  So congratulations to Alex, Annalee, Ellen, Glenys, Judith, Nicola and Tara. 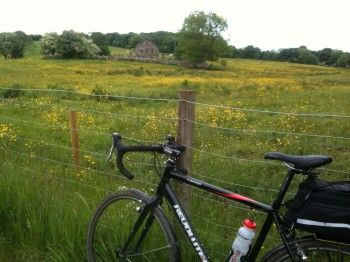 On Sunday my training began in earnest in the fabulous sunshine with a ride that took in Isel Bridge, Setmurthy woods, the shore of Bassenthwaite and the longer than I remembered hill from Castle Inn to Ireby.  I guess it was about 25 miles and in the morning sun was an absolute joy.  My target for getting in some sort of shape is 13th July when I’m in the second leg of a fantastic beer bottle baton relay when we will join the four magnificent routes over a 24 hour period.  Wish me luck!