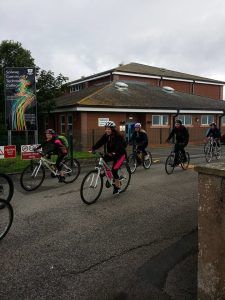 Andrew Callaway, a teacher at the school, said: “The money was used to buy tools and spare parts to help the students learn how to maintain their bikes and ensure they are safe when we go out on rides. Training  has also be given on how to safely lead group rides on the roads. The students are thrilled that we have been awarded this money and  making this dream into a reality.”

Based in Mawbray village, The Lowther Arms closed in December 2018. In May that year, Holme St Cuthbert’s parish council applied for the pub to be listed as an Asset of Community Value, which allowed the newly formed group to bid and gave six months breathing space to consider all the options including a community buy-out.

The grant from Hellrigg Wind Farm Community Benefit Fund has covered volunteer expenses, such as travel costs, meeting room and stationary, so that members of the group can progress with the process.

Chris Atkinson, Chairman, said “We’ve lost just about everything else in the parish, including the shop, post office, and most of our bus services.

“When we realised there was overwhelming support to buy the pub, we immediately began to organise ourselves. A local survey showed that most people want to save the heart of the village – a traditional pub serving traditional food, but with extra facilities like a small shop, meeting place, library, café and courier collection point.”

The group is supported by the Plunket Foundation’s More than a Pub initiative, funded by Power to Change with access to specialist business support. 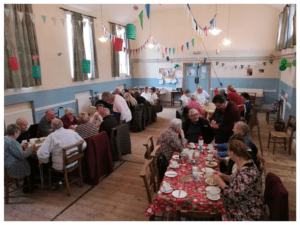 St Andrew’s Church Hall, based in Silloth, benefits around 200 people in the community. The hall is part of St Andrew’s church and part of the West Cumbria Network. The hall provides a variety of activities, clubs and groups including a weekly lunch club, free legal advice, and social activities; for example craft classes. The hall is also available to hire.

The church has undergone a number of improvements over the past couple of years, including new windows and doors and redecoration.

This grant from Hellrigg Wind Farm Community Benefit Fund  supported the renovation of the flooring in the main hall. Many of the users of the all are over 80 years of age and this has meant that the floor is now safe to walk on and without hazards.

The new floor is enjoyed by cubs, sewing classes, pensioners clubs, craft classes, yoga and over 30 people at its free lunches. They also  hold evening dinner and entertainment.

Originally set up by Inspira, CYA started delivering the project in 2017 when Inspira pulled out. Running in collaboration with other youth organisations in Allerdale, it has had an appreciable impact on anti-social behaviour rates across the borough. It works in partnership North Allerdale Development Trust, Wigton Youth Station, Aspatria Dreamscheme, Castle Hill Trust, GLL, Soundwave and South Workington Youth Partnership.

Each organisation offers different youth-led activities in venues across the borough on a Friday night. This grant from the Hellrigg Wind Farm Community Benefit Fund  has supported young people aged between 11 and 19 come together to enjoy a wide range of activities such as team games, quiz nights, craft sessions and cookery workshops.

Cath Clarke, Chief Officer of Cumbria Youth Alliance, said: “Access to positive activities really assists with ensuring young people make a successful transition into adulthood. They become more engaged and we notice marked improvements in their behaviour. Many young people started on the programme as beneficiaries and have now moved into volunteering positions, helping more young people to benefit in the communities.

“Local police have remarked to the clubs what a difference this project makes to young people who often have nowhere else to go. It has led to reduction in petty and persistent offending in some of the most disadvantaged communities in West Cumbria.”

Community projects across West Cumbria tackling a range of issues including anti-social behaviour, health and wellbeing and unemployment have received a share of more than £280,000.

Cumbria Community Foundation awarded the money to more than 50 charitable groups at its quarterly West Cumbria grants panel. Funding was also given to 25 young people towards academic study and foreign travel.

The money came from 23 grant making funds, including those set up by local corporate businesses such as Lamont Pridmore, Shepley Engineers and United Utilities.

Egremont Youth Partnership received £5,000 from the Lord Egremont Fund. James Bowden, Youth Centre Manager, said: “The youth group is grateful and delighted to have received support this year from Lord Egremont towards our core running costs, we entirely dependent on grant aid and fundraising. The need for youth provision within the town is high and the work we will deliver as part of this funding is essential to our young people. Over the next year we will continue to provide a varied programme for the young people of Egremont and the surrounding community with our variety of sessions delivered over 3 nights a week.”

Silloth on Solway Sport’s Association received £10,000 for a planned multi use games area from the Hellrigg Wind Farm Community Benefit Fund. Colin Baty, Assistant Secretary, said: “We are installing a Multi-Use Games Area (MUGA) in the town and this money will be used in the excavation and preparation of the area before a 3G Astro Turf can be laid.

“The MUGA will greatly enhance the outdoor sport’s facilities in Silloth, especially during the dark winter months as there is currently no provision with adequate lighting for the local community to access.”

Last year, Cleator Moor Celtic Football Club was promoted into the Hallmark Security Football League Division One North, which is Step 6 in the FA football pyramid but needed to undertake pitch improvements work to play in the League. Thanks to a grant of £10,000 from the United Utilities Legacy Fund, work can now begin. David Graham, Project Manager, said: “The aim is to bring the pitch up to recognised Sport of England standards for winter pitch use. The money will also act as match funding when we apply to the Football Stadia Improvement Fund.”

Cumbria Police Community Support Officer said: “The club is an excellent environment for the younger members of the community and it also provides an outlet for their parents who regularly attend the club on a social basis. It plays an important part in the whole community and is an essential teaching tool that provides children with a sense of pride and hopefully inspires them to continue to excel in the field of sports.”

1st Seaton Scout Group can now build a brand-new community facility after receiving £30,000 from the United Utilities Legacy Fund. The current scout hut is nearly 85 years old and has been on the same site in the village for more than 40 years. After successfully fundraising to develop a new facility, the grant from United Utilities was the last bit of funding the group needed to begin the building work.

Mike Ditchburn, Acting Chairman of the Scout Group, said: “It felt like Christmas had come early when we were told by Cumbria Community Foundation that we had been awarded a grant of £30,000 from the United Utilities Legacy Fund on 20 December 2019.”

Brian Hemming, who is working on behalf of 1st Seaton Scout Group to raise funds for the new facility, said: “On telling the group of the good news, it was decided that we should all start the New Year by polishing up picks and spades and start on the site this year. The whole group, including our 70 scouts, wish to thank Cumbria Community Foundation and United Utilities, and the whole community for supporting us in achieving our target.”

The closing date for the next West Cumbria grants panel is 22nd February 2019. For more information, visit www.cumbriafoundation.org or call a member of the grants team on 01900 825760.

Around 1,000 children have been learning about the importance of local produce thanks to a grant of £11,840 from the Westmorland Family Community Fund.

The programme links to the curriculum and encourages a better understanding of growing, cooking and learning to love good food. Its aim is to engage children, parents, staff and the wider community to create a powerful voice for long-term change. 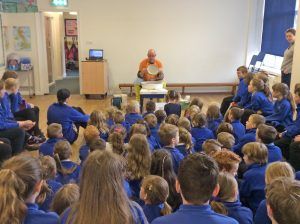 Schools work to a bronze, silver or gold standard, evidencing their achievements against agreed criteria. Activities have included a Farmers Market at Rheged, sausage making masterclasses and design a plate competition.

The Food for Life programme project has been a great success with each school taking part in all the activities on offer. The pupils enjoyed the programme and their appreciation of where food comes from and the importance of good food.

Ian Nutt, Head of Development at The Soil Association, said: “The project has been a great success with each school taking part in all the activities on offer while working towards their Bronze award. It has been wonderful to see how much the pupils enjoyed the programme and their appreciation of where food comes from and the importance of good food.”

Westmorland Family Community Fund have continued to support this project for a further three years with the introduction of a fifth school: Tebay Primary School.